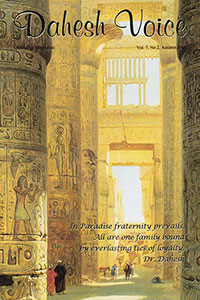 Think of the East, and what immediately comes to mind are religions arid spirituality. 'Think of the West, and at once rationality, reason, science and technology spring up.

Prophets, apostles and other spiritual guides emerged from the East. After Abraham and Moses, there was the advent of Jesus Christ who proclaimed virtue, love, and mercy. His religion grew up with the Apostle Paul in Nabatean “Arabia”, before it spread across Rome to merge with the western mind (See Dr. Khalil’s art., Ar. Sec., p. 16).

Approximately six centuries after Christ, Islam proclaimed the oneness of God, justice, and righteousness. In Persia, about six centuries before the advent of Christ, Zoroaster focused on conflict between the forces of evil, and goodness, appealing to people to adhere to virtue (See Brax’s art.. Ar. Sec., p. 69).

No doubt, spirituality has positively influenced people’s behavior throughout the world. Its benevolence is evident from the teachings of ascetics, mystics and a good number of world authors and thinkers, such as G ibran Khalil Gibran, whose genuine spirituality' appeared not only in his thoughts and writings, but also in his behavior and in the pure love relationship he had with May Ziadeh (See Dr. Bushrui’s art. Ar. Sec., p. 6.3).

Spirituality is oftentimes misunderstood, especially in the Arab world, the cradle of most spiritual guides. Some people have virtually restricted religion to rites and ceremonies, yet they claim that it is the only Truth. They have turned to the past and dwelt in it, secluding themselves from other nations and their great scientific and technological achievements.

Their creativity paralyzed; they have failed to introduce any important innovations. Thus, instead of advancing with civilization, they have moved backwards (See Al-Araji’s art., Ar. Sec., p. 27).

This retreat together with indifference in keeping pace with the advanced nations has resulted in an alarming decrease in intellectual productivity, especially creativity, in the Arab World (See Dr. Nashif s art.. Ar. Sec., p. 40).

Boasting of a splendid past and great ancestry does not advance man, nor benefit him; instead, it enwraps him with shame, if he is not a match for it. In the fifteenth century, the West realized the importance of significant intellectual works; from there onwards, it put into print not only Western manuscripts but also Eastern manuscripts and not a few among them were in Arabic (See Dr. Haouili’s art., Ar. Sec., p. 44). In addition, the West has embarked, at the same time, on innovation and creativity in all fields—philosophy, literature, art and sciences, whereas the East, particularly the Arabic Orient, the origin of divine religions, has remained withdrawn in the darkness that overwhelmed Europe for over ten centuries. The Arabic World is still entangled in chains of the past, surrendering to the Fates, and succumbing to traditions, illusions and superstitions handed down by earlier generations.

We, who listen to the voice of Dahesh, have learned from him that self-dependence and strong will power are necessary' to attain freedom and progress. Anyone who aspires to improve his condition as well as the condition of his people has to struggle to discipline his soul and provide it with spiritual values; however he should also cultivate his mind by widening its horizons and rectifying its logic, starting with education at home and school and continuing throughout his life (See Johnson’s art., p. 13 and Brax’s articles on education in the last three issues of Dahesh Voice.  Laziness, ignorance, and idiocy detain man from real spiritual progress as much as evil and vice do.

Dr. Dahesh showed sincere love to his people, calling sleeping minds to awaken and shackled intellects to emancipate. As a tribute to his noble message, we include in this issue an essay by Dr. Saad El-Din about the uniqueness of the man who has gathered the glory' of literature and art as well as the glory of the spirit (Ar. Sec, p. 5), along with another by Z. Kalous, repeating testimony of the poet Halim Dammous, who bore witness to Dr. Dahesh. (Ar. Sec, p. 13), and a poem by Yasser Badreddine (Ar. Sec., p. 60); in addition to an inspiring, fascinating novella on virtue and nobleness, by Dr. Dahesh himself (Ar. Sec., p. 48).*