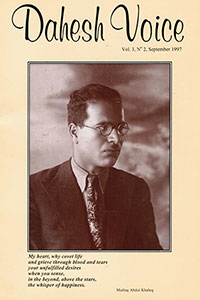 Some poets achieve immortality by realizing the secret that opens its otherwise locked doors. There are a few, however, to whom immortality opens wide its arms embracing them among its children; because they have, before coming to earth, witnessed by themselves the worlds of truth and beauty. Among these immortal contemporary poets in the Arab Middle Eastern world, are Kahlil Gibran, Mutlaq Abdul Khaleq, and Halim Dammous.

Despite their distinct writing styles and the distinguished treasures they left behind, these three poets shared the understanding of poetry as a message built on the trinity of truth, beauty, and righteousness. They embraced ideas and values that they embodied in their apostolic lives and hypocrisy-free attitudes. Thus they were strangers in their societies and strangers among their relatives and friends. Their deep longing was not to an earthly home but to a spiritual homeland.

The three poets believed that death was not a total annihilation but a transition from one state to another; and therefore, they praised it and eagerly yearned for it.

The three poets believed that life is endless, it begins with God and ends in Him; and that between the beginning and the end, one has to pass through uncountable transformations and lengthy paths of purifying pains.

The three poets loved their relatives, their countries and all humanity; but their immense devotion was to the Divine Spirit.

The three poets believed in the unity of religions, maintaining that the prophets are fingers of the one hand of Divinity. They believed that the love of God lies in practicing high ideals and spiritual values and not in performing rituals.

Mutlaq Abdul Khaleq (1910-1937) appears today far more luminous and closer to real life than he did in his short life. Halim Dammous (1888-1957) emerges as a greater poet than many names glorified by political, religious, or temporary literary styles. Both poets closely knew Dr. Dahesh, witnessed his prodigies and embraced his spiritual philosophy. However, Mutlaq Abdul Khaleq did not live long to witness the proclamation of Daheshism in 1942—whereas Halim Dammous suffered imprisonment and persecution because of his beliefs. On the other hand, the religious and political persecutors have been disgraced and condemned by daring liberal voices.

Kahlil Gibran, Mutlaq Abdul Khaleq, and Halim Dammous belong to the spiritual school in an age enslaved by materialism and degraded by greed. For the last two years, in commemoration of the centennial anniversary of Gibran’s immigration to the United States, Dahesh Voice has devoted a section for the study of Gibran, his genius, and uniqueness. Today, Dahesh Voice honors the 60th anniversary of Mutlaq Abdul Khaleq’s death, and the 40th anniversary of Halim Dammous’ death. Thus, this issue of Dahesh Voice includes two extensive studies of the life and work of these two poets who perceived that to achieve immortality one has to break the outer shell of life and grab its essence. ★