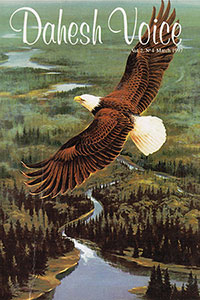 A Necessary Condition For Progress

On March 23, 1942. there was a proclamation of the new spiritual message of Daheshism in Lebanon.

Prominent men of the distinguished elite class embraced the new faith. However, Beshara El-Khouri, who was elected President of the Lebanese Republic (1943-1952) the following year, did not honor his oath of office of upholding the constitution which guarantees freedom of expression. This behavior of holding oneself above the law was encouraged by the sectarian nature of the political system (if Lebanon. The prominent positions in government, as well as the jobs in the public sector, were distributed according to a quota system apportioned among the established Christian and Muslim denominations. It was essentially a man's sect, and not his credentials, which entitled him to governmental positions or favors. The spread of this new faith, which teaches the essential unity of all religions and indiscrimination, threatened the leading sect in Lebanon, which feared losing its leverage of power. This threat was more immediately felt when El-Khouri's sister-in- law. Marie Hadad. her husband, daughters, and son-in- law embraced Daheshism. The President of the Republic, who is considered the first and highest representative of the leading sect, in cohort: with an influential figure, Michel Chiha -—Marie Hadad's brother-- and their aids in the government did everything in their power to put an end to the Hadad's friendship with Dr. Dahesh. but to no avail. All the attempts of Beshara El-Khouri, his stooges in (he government, and ins religious allies against the new message, failed miserably. Bcshara El-Khouri, them resorted to illegal means. He waged a persecution campaign against Dr. Dahesh and his followers; in the process, he abused his presidential powers and violated the Lebanese constitution and its laws. The corruption of his administration and his falsification of the parliamentary elections led to his deposition from office in September 1952.

The suppression of the freedom of expression is a common occurrence in history. The spiritual guides, the scientists, and social reformers were, almost invariably persecuted throughout history. Socrates, the greatest moral teacher of all time, was condemned to death by drinking hemlock. He was indicted on the. charge of “corruption of the young” and “the neglect of the gods.” But. the moral truths he preached became the cornerstone of the edifice of modern thought. Galileo Galilei was forced to renounce his assertion of the theory of planetary motion while kneeling down before the Spanish Inquisition tribunal because his theory contradicted the dogma of the Catholic church. However, all men today accept and hold his views. The spiritual guides, one and all, have suffered persecution.

All religions believe in one God -or a Divine Force- who created man and gave him freedom of choice. It is on the basis of this freedom, that man is rewarded or punished accordingly. For this reason, any imposition of a certain faith is an abnegation of this personal freedom and an act of disobedience to Divine will. The one who embraces a faith out of fear or in order to ingratiate himself into the graces of a religious group is nothing but a wood worm eating away at the very root of that faith. The religious authorities which adopt a policy of coercion bring about, consciously or unconsciously, the corruption of religion and the destruction of the very basis of human society. Religion loses its meaning and relevance without, the spiritual values and teachings of the prophets which include, love, mercy, tolerance, justice, and brotherhood of all mankind. Any society which disregards or fails to respect freedom of belief becomes stagnant; for truths, whether scientific or spiritual, do not take root nor prosper except in an atmosphere of freedom.

There is unanimous agreement among historians that religious wars have caused more casualties than secular wars. Thus it is clear, that if religious tolerance and freedom of belief and expression are not maintained and respected by all nations, there will be no peace and tranquility on earth. However, there is still hope; most nations have committed themselves to the preservation of human rights, most important of which is the freedom of belief. As for the nations or social groups which still regard themselves as the sole guardians of truth, they will automatically isolate themselves from the rest of the international community and from the onward course of progress, (see Arabic section pp. 5, 10, 49).