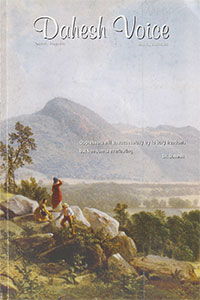 In Memory of Halim Dammous

I have been a purely materialistic man, but now I am a purely spiritual man... Great divine truths have been revealed to me, that my poor pen fails to describe.” These words were recorded by Halim Dammous (1888-1957), a great Lebanese poet who passed away 50 years ago.

For the occasion, three articles on Halim are published in this issue. They relate, through his beautiful and inspiring poetry, his new, amazing, spiritual experience with Dr. Dahesh, the man of spirituality and ascertained miracles. They allude as well to his courageous stance towards the then Lebanese President, who unlawfully jailed him and his brothers-in-faith without any accusation. Clearly, Dammous’ poetry serves a humane and noble cause in a blind, sectarian society (See Burgess, Eng. Sec., p. 4; Badreddine, Mahdi, and Brax Ar. Sec., pp. 6-38).

In the Arabic Section, Dr. Samira Madi explores humane trends and tolerance in the original and authentic Islam as interpreted by Sheik Mohammad Khalid. These noble qualities were explicit in the Qur’an and the Hadith as well as in the personality of the Arab Prophet who was distinguished by love, justice, and moderation (Ar. Sec., p. 39).

Based on statistics, Dr. Ali Haouili discusses the globalization of academic teaching, the emigration of Arab graduates and the commercialization of education (Ar. Sec., p. 51).

Dr. William Miri presents the life and personality of the great writer Abbas M. al-Aqqad as he knew him in person, and through reading his books. He describes al-Aqqad’s instructive and pleasant meetings, his death, wisdom, and his standpoint towards women and the Egyptian Revolution (Ar. Sec., p. 61).

In the English Section, Dr. S. Salem analyzes the causes and consequences of mass extinctions, specifically on the problem of carbon cycling and that of hydrogen sulfide; then, he presents what he believes to be a complete picture of a global catastrophe and its causes (p. 9).

Dr. William Hanna discusses “disease, illness, and medical materialism in Western medicine.” He concludes that “Western medicine must already now exist within an overlapping set of values, otherwise it could not even function the way that it does as a roughly unified discipline” (p. 18).

Saad Abulhab tracks down the origin of Arabic script, from Musnad to Jazm. He analyzes various significant factors that helped the birth of Arabic script and studies this origin within the sociological and geographical realities at that time (p. 23).

This issue also includes a philosophical poem by Dr. Majid Fakhry (p. 33) and as usual, an impressive short story written by Dr. Dahesh, in which he describes a bizarre and tragic incident which happened to a beautiful young girl, her father, and their shepherd. The mind-boggling incident cannot be explained in the light of divine justice, except through the belief in reincarnation and just deserts, for there is nothing haphazard in the afflictions that befall humans (p. 34 and Ar. Sec., p. 58). ★