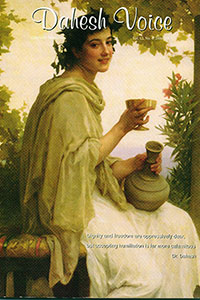 The Advent of Islam and Arab Civilization

In previous issues, a series of eight articles discussed, in light of the Daheshist view, that world events are directed by a Divine Hand that does not wrong anyone, not even by “the equal of an atom”. What befalls people is what they merit, according to their deeds, thoughts, desires, and tendencies. It was also clarified that punishment and reward depend on the extent to which people comply with the Messengers’ spiritual teachings, presented to them in proportion to the level of their intellect and tendencies as well as their cultural and natural environment. The current issue follows up on this view and presents the noble Arab Prophet in his lofty spiritual and humane propensity. By virtue of his Holy Mission, the Prophet moved Arabs from an era of division and spiritual darkness into that of unison and spiritual light. The original moral precepts of Islam in peace and war are explained, demonstrating that they are based on brotherhood, mercy, and limiting fighting to self-defense. In addition, Islamic teachings, according to the Qur’an, call for the belief in all previous prophets (Ar. Sec., p. 8).

Ala al-Araji agrees with Jawad Reda that Islam attempted to transform Arab life, but “Arab society was not totally delivered, and remained in a state of revolution and counter-revolution, hanging between Islam and pre-Islam.” He also agrees with Reda that modem Arabic education is strangling children’s freedom and suppressing their individuality. However, al-Araji criticizes Reda’s views about Arab justice, putting forth that Arabs never knew social justice and real rationality, even in the climax of their civilization (Ar. Sec,, p. 19).

Looking back at Arab-Islamic civilization in its golden age, Dr. Victor Kik recalls Avicenna’s Canon of Medicine. He reviews its commentaries, translations, editions, and the history of its teaching in Europe. He then presents the medical benefits of some herbs mentioned in Avicenna’s Canon as well as by other ancient Arab scientists, that are still being used today (Ar. Sec., p. 30).

In this issue, Mary Alloush describes, in a heart-touching way, her escape with thousands of people from their beloved country, Lebanon, in the 33-day war in the summer of 2006 (Ar. Sec., p. 73).

In the English Section, Princess Lubna Althanayan Al-Saud writes about education for women in Saudi Arabia, which has become “a story of growth and progress” (p. 4).

Dr. Taysir Nashif discusses some manifestations of oppression, specifically uniform lines of thinking. He hints at sectarianism, Nazism and Communism, white man’s mission, and the survival of the fittest, etc. He concludes that to free our thoughts of “the shackles of intellectual uniformity, this structure should be destroyed by understanding and analyzing the complex reality” (p. 9).

Dr. S.I. Salem discusses the preservation of the species and its evolution throughout history, giving examples from Uruk City, China, the land of Canaan, and elsewhere (p. 18).

Dr. David Majdalany presents defects that may occur in the hearts of newborn infants, their diagnosis, surgical interventions, and treatments (p. 26),

This issue also includes, as usual, a short story by Dr. Dahesh in which he reveals the meaning of sincere love which takes root in eternity and lasts forever (p. 32). It also includes two book reviews, one by Yasser Badreddine on Dr. Dahesh’s Awham Sarabia [Fleeting Mirages], and the other by Ahmad aLMoallem on Mutlaq Abdel-Khaleq’s poetry in Al-Raheel [The Departure],

In addition, we publish, in this issue, a poem by Ali Juma’a dedicated to Dr. Dahesh and some writings by the late journalist and author, Samir Shikhani, which he had sent us before his passing away in 2006. ★