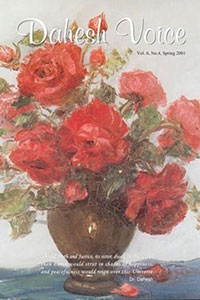 The Importance of Developing Critical and Creative Intellect in Youth

It is important that homes and schools focus on teaching good behavior, refined feelings and tendencies as well as provide youth with the necessary education that leads to rapid success in life.

However, it is more important that education stress on developing critical and creative intellect in youth. Daheshism emphasizes this significant side of education. Rationality encompasses developing a critical sense based on sound logic and correct reasoning (induction and deduction). It also encompasses the ability to discern good from evil, right from wrong, and scientific truth from pseudo-science and all other falsehoods. Rationality draws its significance from the fact that human tendencies, even lofty ones, do not provide man with a truthful view of facts, unless aided by sound logic. The world today is witnessing worldwide irrationality promoted by exploitative mass media and popular cultures that thrive in illiterate societies (See Editor’s art. in Ar. Sec., p. 5).

The crisis feeing the Arabs’ present mentality may be attributed, in part, to failure to give youth sufficient intellectual training in objective criticism, whether of one’s self or environment, as well as to the reluctance to embark on innovation and creativity in science and other various domains, for fear of violating forefathers’ traditions and tenets. Following in the steps of their ancestors rather than creating and innovating in the fields of art, science and philosophy may have caused contemporary Arabs to fail in catching up with the developed nations (See Ala Araji’s art. in Ar. Sec., p.43). This paralysis of the mind and spirit has been shown in Khalil Hawi’s poetry—a mirror reflecting his tragic views of the Arab condition and revealing his contradictory feelings and emotions (See Dr. G. El-Hage’s art. in Ar. Sec., p.61).

On the other hand, the West has witnessed great intellectual achievements since the Renaissance. Everything was subjected to empirical experiments, mathematical concepts, and explanations only through the physical laws of nature. All underwent critical judgment, even the Scriptures. The Gospels have been interpreted in an intuitive way and studied via an analytical and comparative approach, leading to a better, deeper, purer and more rational understanding of religion (See J. Khoja’s art. in Ar. Sec., p.30).

Similar to the scientific contribution that, a few centuries ago, renouncing Ptolemy’s theory about the earth being the center of the universe, and consequently enraging the church, critical and innovative mind of the 20th century drove courageous scientists to launch spacecrafts searching for life beyond our planet (See Dr. S. Salem’s article p.4). Yet, what science may or may not discover has been spiritually revealed beforehand. More than half a century ago, Dr. Dahesh asserted that life was not restricted to Earth, that it also spread throughout billions of planets, and that it is subjected to a divine order that governs every being wherever he may be: who follows the spiritual commandments and proscriptions of his world will attain a better realm and enjoy happiness; otherwise he falls to a world submerged in misery (See Selections from Dr. Dahesh, Eng. Sec., p. 26, and in Ar. Sec., p. 54).

As the critical and creative mind led scientists to search for man’s origin, it also led great poets to great discoveries. Lamartine, the French poet, saw through his visionary' imagination what agrees with Dr. Dahesh’s revelation that “man is a fallen angel” (See A. Younes’ article, in Ar. Sec., p. 20).★