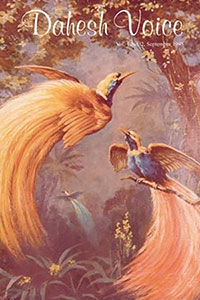 Between Hope for Love and Spiritual Values and

Here we are a new with Kahlil Gibran. Since its birth, Dahesh Voice has been a tribune for his voice and spiritual values which have been materialized and enhanced through Daheshism.

In this issue, Professor Suheil Bushrui, Chairman of the Kahlil Gibran Studies Center at Maryland University, expresses Gibran’s views on the unity of vision and ethics, which encompasses the unity of souls, the unity of mankind, the unity of life and death, and the unity' of religions. According to Gibran, a person’s real freedom cannot be realized as long as he is enslaved by worldly desires and idols; and justice among people cannot be established unless fraternity and love govern the relations among nations. (See Ar. Sec., p. 19)

These sublime moral values are not limited by time or society. They have been called for by all religions, even the most ancient ones, such as the cult of Osiris. Justice, integrity, equality before the law, human fraternity and shunning evil were among the lofty principles included in The Book of the Dead (See Ar. Sec., Suleiman’s art., p. 80 ). They reached ultimate levels in the life of Jesus Christ who realized human perfection (See D. S. Johnson’s essay, p. 21 )

However, pursuing virtues, especially love and justice, requires a soul change before a change in laws and social regimes. It all starts with the child’s right upbringing, espe­cially in our times flooded by visual and audio-information and submerged by venom-cloaking entertainment (See Ar. Sec., p. 7). Children need a good example to respect and follow; and who is a better role model than Mahatma Gandhi himself? (See Ar. Sec., A. Gandhi’s essay, p. 30)

Looking through the perspective of the unity of life and death and the unity of all that exists, and through the parable given by Christ that what man sows, he will reap, we would easily fathom the short stories written by Dr. Dahesh about reincarnation   - man himself predetermines his fate and his future throughout his life cycles to either live in happiness or misery (See Dr. Dahesh’s story, p. 27).

That is why Dr. Dahesh holds us responsible for what we do and warns us against sinking in materialism. He advises that “a life that lacks sublime spiritual values is nothing but a horrid hell of dreadful and mighty consequences” and that “religion is the only path that leads to the oasis of tranquility and security'. Turn back to it and follow its straight path; thus, your lives would become meaningful, and your existence, already stormed by destructive materialism, would become balanced” (Dr. Dahesh’s “My Word for the Year 1982”, p.4).