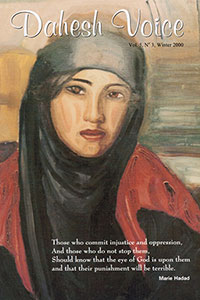 The Person of the

As the twentieth century is drawing to a close, Time magazine is asking a select group of readers to name the most influential figure of the century, i.e., the Person of the Century.

Numerous suggestions have been made, each of them presenting a plausible argument. Hitler, Lenin, Roosevelt, Churchill and many others have had a profound impact, whether bad or good, on the course of events in this century. Einstein, Goddard (the rocket scientist), Turing and von Neumann (inventors of the computer), Watson and Crick (biologists), and other notables have a great influence on science and technology. T.S. Eliot, J. Joyce, Stravinsky, Disney and many others have left their imprints on literature, the fine arts, and entertainment.

However, those who consider history' as a continuous stream ruled by spiritual causality, and not as interrupted eras, are not confused by temporary events, regardless of how shocking they may be. They are endowed with the ability to discern the greatest and most effective events in the perpetual flow of history. Communism collapsed after having exerted unimaginable power that persisted more than 70 years. Nazism melted away after it. displayed military' arrogance unparalleled by any other political movement.

If we really look for the most lasting impact we find it in literature, the fine arts and sciences. In The Advancement of Learning Francis Bacon (1561       1621), the English philosopher, said:

“We see, then, how far the monuments of wit and learning are more durable than the monuments of power or of the hands. For have not the verses of Homer continued twenty-five hundred years or more, without the loss of a syllable or letter; during which time infinite palaces, temples, castles, cities, have been decayed and demolished? ” And in his book Letters on the English, Voltaire (1694 -1778), the French philosopher, agreed with those who maintained that Newton was the greatest man, for “It is to him who masters our minds by the force of truth, and not to those who enslave them by violence, that we owe our reverence.”

Civilizations would not have made major progress without the masterpieces of literature, the wonders of art, and the achievements of science and technology'. Creative geniuses are the developers of civilizations (see an article on Civilization m the Arabic section, p, 57). However, the true greatness that withstands time is better represented by noble persons that exert an enormous and benevolent influence upon the lives of millions. They are the source of spiritual strength, ethical principles and moral precepts throughout history (see an article on Spiritual Progress m the Arabic section, p.5). They sincerely believe in their teachings, and apply them to everyday conduct. They do not have an intimate personal life and a distinct public one. Because of their devotion to their cause, these great people suffer rejection and persecution. Yet they stand up against the forces of violence and evil with evershining hope illuminated by the light of God. Their greatness never fades because it is based on internal strength that originates from the Eternal Spirit. They are the prophets, the apostles and the spiritual guides who have been united by the Golden Rule: “Do unto others what you want them to do unto you.” Sometimes the drive they cause does not stir many souls. No historian of Jesus’ era was interested in writing about him, yet his impact on civilization has been growing as the years pass by.

Accordingly, through the perspective of spirituality, two great persons stand out among paramount leaders of the twentieth century. They are: Mahatma Gandhi and Doctor Dahesh. ★