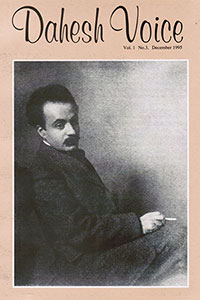 One hundred years ago, a twelve-year-old boy landed in America. Nothing set him apart from the thousands of immigrants he was accompanying, except for a latent seed of literary genius that a new land was about to nurture.

As uneventful as it may have appeared then, that fact was not coincidental in the life of Gibran Kahlil Gibran — the American land harbored him, and offered him the freedom of the spirit as well as various cultural resources that were not available in his native land. Besides, the people of the new continent by recognizing genius in him helped him to develop it. Without any doubt, if Gibran had not immigrated to the United States, his life would have taken another turn; we may not have had The Prophet, or Jesus, Son of Man; Ar-rabitah Al-Qualamiyah may not have been established, and Arabic literature would have been deprived of a blessed movement that infused it with new life.

Some events in one’s life are hardly explicable, if at all, during one’s lifetime, and that is because some unknown spiritual order links causes to effects and establishes a plan for life on the basis of just deserts.

The Editorial Board of I DAHESH VOICE joins those who are celebrating the centennial anniversary of Gibran’s immigration to America, first for the far-reaching consequences such a move had on Gibran's life, and second, for the several connections between him and Dr. Dahesh, among which we list the following:

Both Gibran and Dr. Dahesh emigrated from their native lands; the former in fact left his country, and the latter emigrated while still living in his homeland. Gibran voiced his desperate outcry: “You have your Lebanon and 1 have mine," while Dr. Dahesh eulogized Lebanon even before the devastating war had spread across the country. And although both authors were confined by the boundaries of countries, they remained humanistic in their endeavors, and yet, each suffered a spiritual exile in this human world of ours.

Their outlook on life could be viewed as one. Both believed that a wise and omniscient spiritual power lies behind everything, and that all beings are governed by a spiritual unity. In their understanding, the human spirit, an indivisible part of a Divine Spirit, must be reincarnated several times on earth in order to cleanse itself from impurities and unite with its creator. However, a person cannot achieve that unless he/she first realizes freedom of the self, i.e.. liberation from the servitude of all passions and base inclinations. That is also the basis of all freedoms.

The two authors meet again in their rebellions over outmoded customs and deceptive values. They believed that all religions are intrinsically identical — not a portrayal of empty rituals but rather an aspiration towards loftiness that could be achieved by continuous effort throughout life.

In general, what Kahlil Gibran has expressed symbolically, or perhaps just alluded to. Dr. Dahesh has interpreted and clarified in his writings.

Today, one hundred years after Gibran's coming to America. DAHESH VOICE intends to carry through Gibran's spiritual and literary journey.