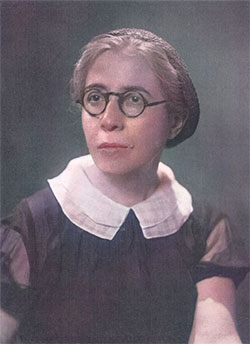 This testimonial is taken from “Dr. Dahesh and Spirituality” by Mr. Youssef El-Hajj and published in Beirut in 1946. It is given in writing to Mr. Edwar Abi-Joudeh, the head of judiciary police in Beirut as per his official request dated February 23, 1944.

I have heard people talk about Dr. Dahesh and his miracles. I have heard such talk from trustworthy individuals and as a result, I have gone to visit him. I was a believer, yet at the same time, I was careful and doubtful. I used to believe that everything in life is a miracle—just contemplate the seed that grows in the ground, electricity, scientific discoveries, giving birth, life, death, and other things. I was careful and in doubt because it is important to be as such. It is just like the presupposition of the worst things first as a necessary condition of experimentation—especially at this time and age where we find money to be the lord of the world and where the least and cheapest rich individual is respected by all… Is there anyone above money, wealth, and high stature? No, I don’t know anyone that is. The spiritual aspect of life and the inclinations towards ideals seem to be scarce in people and so is the existence of individuals with perfectly rational minds.

However, I have found myself faced with a strange and unique event in its classification: that the Dr. Dahesh you ask me about is the miracle of this age, because he places everything in its place and gives everything its real value. This is an unexpected thing, hard to believe, and have not been encountered before, however, it is true and realistic. He relies on the gospel of Lord Christ who is the highest persona of the Bible. We used to know the Holy Book and considered it to be a highly regarded and an ingenious divine accomplishment. However, our knowledge of the Holy Book was not sufficient to base our life completely according to its principles. Therefore, we find ourselves reassured that Dr. Dahesh is the Man of the Bible. After that, we suddenly found ourselves facing a supernatural power, because we saw the return of biblical miracles: water turned into wine as in the wedding at Cana; then there was the multiplicity of bread and fish and so we have seen the multiplicity of things in front of our eyes; we saw the sick healed and prophecies becoming true.

There is nothing hidden here even the thoughts, past, present, or future. There are no distances or locked metallic boxes. We also have seen how punishment is inflicted on those that attack and assail Dr. Dahesh with insults. We have seen him command the elements of life and death and they would immediately obey him. We have known how Dr. Dahesh talks and have known him through his writings, miracles, and association with people. When he talks, there is no argument—no matter how effective and strong—stands against his arguments. We have seen him in the company of great men, writers, journalists, and highly educated groups and how they all admired him and were dwarfed by his level of thinking. They would all ask him for guidance and instructions and he would respond with complete simplicity and extreme innocence. He is the greatest expression of genius when it comes to his sublime point of view and the nobility and the purity of his thought. He is also a real person in using practical current things. He teaches us then leaves us alone to evaluate things based on their merit.

As to his teachings, he makes it possible for us to touch the reality of the Spirit and opens to us a larger window to the other world—that until now, no one can pass or transgress. If we believed in him, it is because we found palpable proofs about his spiritual mission that cannot be denied. Why then were we not satisfied with the priests and clergy who claim to be associated with the Gospels? Had this veil been very beautiful, it wouldn’t be able to hide their lies and actions that harm the faith more than help…people have become accustomed to (red tape) and paying money for religious matters…The church—especially the Church of Rome—makes everything available for money; such as: absolution, expiation, titles…etc. For this reason, once you become acquainted with Dr. Dahesh, every apprehension is eliminated and every doubt is removed on its own and we find ourselves embarrassed from the vile thoughts passing through our minds. Dr. Dahesh is the miracle of this era and since Lord Christ, there has been no incarnation of such grandeur.

Dr. Dahesh spent only few months of his life in a simple small school in Ghazeer (near Beirut) and Sidon and did not receive formal education. He says about himself “I am the son of Life.” As to his publications, it exceeds fifty [over one hundred towards the end of his life] and will be a great tool to explain his personality. All of his publications were written with an incredible speed. I saw him myself during his hours of inspiration where the pen was flying over the paper. We are a large group of people who are familiar with his daily life and are ready to give testimonials to that effect, for we have lived with him and have become acquainted with everything that pertains to him from the day of his birth to this day. As to the miracles, they have always been with him and everything about him is documented to the minute since he was twelve years of age. There is no doubt about the benefit of his teachings because they are full of truth, assurance, and confidence about what awaits us after death. Through his teachings, we have become unconcerned with the trivial and we could care less for the things that once were important in our view. It is sufficient to say that we have no concerns and that we live a happy life.

This is the only school that inspires in us such great things as: history of earth, astronomy, medicine, causes of disease and their cure, mystery of giving birth, death, immortality, and many other things that we knew nothing about; however, time has not come for us to publish these things. Had we had an enlightened and wise government, they would have realized that in Dr. Dahesh they have priceless and eternal springs. They could have benefited from him before other nations do—nations who wish to renew their strengths with such miraculous powers. Powers that a rational individual does not doubt and bow to it without exceptions, because it is the power of God. I do not have pity on those that assault Dr. Dahesh, however, I do pity those neutral individuals that do not engage themselves in studying such a supernatural power. One day, we are going to render the saying: “A prophet is respected everywhere except in his own hometown…” to be false.

You are going to ask me here how does Dr. Dahesh provide for himself? The answer is: I have seen him with stacks of money—not even a bank has as much as he does. I have seen him give to the poor without account, however, when it comes to himself, he accounts for everything. I hope people see in such a great power “lights of enlightenment” filling the skies of my country.