Testimonial of Helen and Nicholas Daher 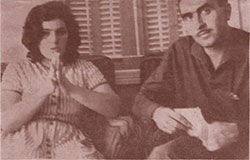 Testimonial of Helen and Nicholas Daher

Daheshism is a reality that has spread throughout the various Lebanese circles. It seems that it will continue to spread in the future, because in every day, a new believer is added to the rank and file. We were visited this week by two individuals and shared with us the supernatural events they have witnessed.

What is your name?

What Daheshist stories you may have for us?

Details of the first?

Dr. Dahesh had several visitors when my brother and I paid him a visit. One of the visitors was cooling off by the use of an elegant and beautifully decorated fan. Dr. Dahesh liked the fan so much that he took it in his hand to feel its texture (or to check it out).

The fan was immediately doubled and we ended up with two fans. It is important to say here that the second fan was an identical replica of the original. Dr. Dahesh gave the miraculously doubled fan to one of the visitors who kept it in her possession.

We continued our interview saying: What was the second miracle?

She said with enthusiasm: Ten days ago, I visited Dr. Dahesh for the second time and as usual, he had several guests present, including Dr. Farid Abu-Suleiman. One of the visitors was wearing a silver ring topped with a single pearl. Dr. Dahesh asked his visitor to give him the ring.

What happened to the ring?

As soon as the ring rested in his hand that he threw it at me with an incredible speed. So, I looked at it and realized that it has changed from silver to gold, while maintaining its size but not its style—a style that dazzles the sight with its brilliance. The miraculously altered ring remained with its original owner.

Then we said to the new Daheshist: What is the third miracle?

I visited Dr. Dahesh for the third time on the twentieth of this month and he asked me to write down the Daheshist Ramz and then proceed to burn it. After I did what he had asked me to do, he asked me to pour the ashes into a piece of paper, fold it and then hold it in the palm of my hand. Then he asked me to open my hand and then open the paper that contained the ashes. When I did, instead of seeing the ashes, I saw the same Ramz that I had written and burnt earlier with my own hands. I still keep this Ramz.

She took the Ramz out of her purse and showed it to us. Then we asked her if she saw anything else during that visit?

Yes, I was carrying with me a sealed bottle of perfume that I wished to open during my visit. Dr. Dahesh asked me to pour a little bit of perfume on his hand and I told him that the bottle is sealed and I need to open it first. He told me: Give me the bottle. He took it and started to pour the perfume on his hand and mine. I was looking at him with absolute amazement. When I took the bottle back from him, it was still sealed!

What do you say about all this?

I see Dr. Dahesh as a light in the darkness of this materialistic world.

It was time for our second visitor. We asked: What is your name?

What have you experienced with Dr. Dahesh?

Fifteen days ago, a friend of mine in Kuwait sent me an envelope containing four letters. One was addressed to me and the other three addressed to friends.

Were you certain about the total number of letters?

I emptied the envelope during nighttime and confirmed the number of letters and their recipients.

What happened after that?

In the morning, I checked the envelope again and I was only able to find three letters and not four. I was puzzled and searched for the missing letter to no avail. When I went to Dr. Dahesh and told him the story, he was taken by the Spirit and put his hand on my knee and immediately the letter appeared. He then said: This is your missing letter. Sure enough, it was the same missing letter. Afterwards, I delivered it to its intended recipient.

Did you see another miracle?

The second supernatural event took place in my car. Dr. Dahesh asked me for a match or a lighter to burn a Ramz he had in his hand. When I told him that I don’t have any, he extended his right arm through the car window, while the car was stopped, and pulled a lighter from the air. He used the lighter to burn the Ramz then he threw the lighter out from the window and it immediately disappeared. I was so surprised that the people gathered near the car did not notice any of this.

Where did you go from there?

We arrived to the residence of Dr. Dahesh and I was so puzzled to see another Dr. Dahesh laying down in his bed reading, while Dr. Farid Abu-Suleiman sitting next to him. I looked at Dr. Dahesh that entered the house with me in astonishment, he extended his arm to say goodbye and as soon as I touched his hand that he vanished into thin air.

What do you think of all this?

I sensed in Dr. Dahesh the pure truth that I was searching for. I owe him for my enlightenment and for directing me towards the right path—the path to decency and righteousness and the avoidance of evil.