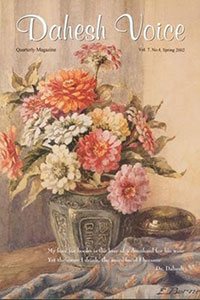 and the Progress of Civilization

Religion is still considered as the principal component

of culture in many countries. The recent events which shook both the United States and the world have proven that, to keep its purity and raison d’etre, religion must remain a spiritual power intended to unite and reconcile nations. This can only be attained through tolerance, mutual understanding and the acceptance of others. Hence, in a really civilized society, culture is founded upon spiritual values, where people understand and respect all beliefs while seeking the material and spiritual benefits of all humankind (See Editor’s art. in Arabic Sec., p. 5).

The natural and human sciences are also components of culture. Since techno-scientific development is a requisite to realize progress in modem civilization, it must be a priority in the endeavor of developing states, which enables them to catch up with the advanced nations (See Al-Araji’s art. in Arabic Sec., p. 17).

Literature is also a very significant component of culture. Two authors, whose creative works combine the cultures of the East and the West, are presented in this issue. Dr. Suheil Bushrui has provided us with a speech he delivered in England on the 125* anniversary of Al-Rihani’s birthday. Dr. Bushrui casts Al-Rihani as a pioneer of literary innovation as well as intellectual and social reform, encompassing both Arab and English cultures. Significant elements in Al-Rihani’s thought are his call for religious tolerance and belief in the unity of religions (Arabic Sec., p. 28).

Dr. Victor Kik writes an essay on Cahid Sitki Taranci, who fuses in his poems the spirit of the East with the culture of the West, and who has been considered as one of the fathers of modern Turkish poetry (Arabic Sec., p. 46).

In its various aspects, art is one of the fundamentals of culture. This issue of Dahesh Voice features some aspects of fine art in Egypt presented by M.I. Qeery; in his review of Ezzeddin Naguib’s book, .Artists and Martyrs, Qeery contrasts an ugly face of political reality with the beautiful face of fine arts, which artists use as a weapon to fight tyranny, and in doing so, they become martyrs. Between Ahmed Sabri, the first martyr of fine art. in Egypt, and Al-Hussein Fawzi and Angy Aflaton, are a great number of important artists who fought under the banner for the dignity' of man and the right to a respectable life. However, they were rewarded with rejection and humiliation or imprisonment—they were faced with oppression from everywhere (Arabic Sec., p. 68).

In addition, readers will enjoy a short story in which Dr. Dahesh discloses some of the universe’s eerie mysteries (p.20 & Arabic Sec., p. 55); an article by Dr. S. Salem, in which he displays the genesis of the cosmos according to modern scientific theory' (p. 4); an article by Mr. Majed Mehdi about the renowned Dr. Mursi Saad el-Din, showing his respect to the members of this family shaped in culture and values, in particular, his son Hamdi who translated many Arabic poems into English (p. 28 & Arabic Sec., p. 49); a surge of emotion expressed by D. Johnson upon the birth of his first child (p. 12); and a poem by Dr. M. Ashqouti (Arabic Sec., p. 66) in which he portrays the tragic social situation in Lebanon, refusing to succumb to it.*