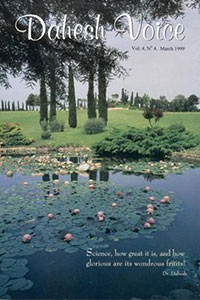 The Fruit of Spiritual Decline

In the past few months, the attention of the world media has focused on four major crises: First, in Kosovo, the Serbian President has ravaged cities and villages of Muslims who were demanding their right to self-determination, leaving behind thousands of victims and hundreds of thousands of homeless people. Religious and ethnic tolerance has no place in the soul of this fanatic and arrogant president!

Second, Russia’s tycoons, who largely control the economy, have smuggled most of their assets abroad and have managed to evade taxes. This has resulted in a plummeting currency and a government short of paying salaries to millions of soldiers, teachers, coal miners, doctors, pensioners, etc... Moreover, the most shocking event was the recent discovery', by a team of military' investigators, that thousands of Russian soldiers had been fed dog food, and that a thousand tons of animals food was re-labeled as canned stew. Deserting soldiers begging on the streets of Moscow have become a common sight!

Third, organized riots in Indonesia, the largest Islamic country (comprising 200 million people), left more than one thousand dead, hundreds of women raped as well as five thousand buildings ruined. These riots were triggered by a perpetual corruption that is encouraged and sanctioned by the President himself, who has systematically plundered billions of dollars which were funneled to his children and relatives in the form of business contracts. The economy was destroyed, and the President was forced to resign. Consequently, the Chinese minority, comprising only 5% of the population yet controlling about 70% of the economy, suffered significantly because it lost its protection from the President.

Fourth, in the United States, the President has disgraced both himself and his office through his reprehensible adulteress conduct, which has violated the fundamental moral teachings of all religions. The scandal has left the American people deeply divided. There are those who believe that the President’s behavior cannot be separated from his office, since strong leaders are those who can inspire their citizens to consider the importance of spiritual values. Then there are those who believe that political leaders should not only be judged by their personal moral conduct but also by their ability to perform noble deeds and ensure true justice among the people. I f we are to condemn every' immoral conduct, we also must believe in the nobility of forgiveness, especially when a wrongdoer declares contrition. Furthermore, it is our right to embrace the right of privacy. (See World News. p.88. Arabic Section)

Finally, we must wonder: is it not the decline of spiritual values subsequent to the rise of materialistic values, which is responsible for most of our social ills, including the loss of morality, heightened crime, perpetual greed, nepotism, perverted television shows, and even the indifference of the public toward the accusations against the President’s immoral behavior?

Today, we are witnessing the fruit of the spiritual decline that has spread throughout the world. Immorality has assaulted governments, the media, the creative arts, universities, and even religious insti­tutions in both Western and Eastern countries. It is important to remember that we cannot be healed from our social ills without returning to the spiritual values taught to us by our prophets and spiritual guides. I rue morality is our only salvation. (See Spiritual values According to Dr. Dahesh. p.5. Arabic Section)