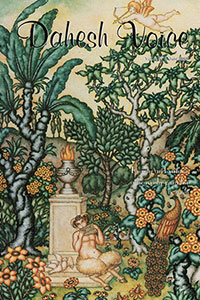 The Voice of the Future

With great pleasure we celebrate on June first, 1998, the third anniversary of cT)ahesh Voice which coincides with the eighty-ninth Birthday of Dr. Dahesh.

Three years after the appearance of our inaugural issue seems to be an appropriate time to look back on what we have accomplished and forward to what we hope to do in the future.

Dahesh Voice has always aimed (and we think successfully) at reflecting the voice of Dr. Dahesh, the voice of truth, virtue and liberty; the voice of civilization ahead of its time preaching love, justice and humane values, the voice of courage lashing against corruption, tyranny as well as against falsehood, delusions and decadent beliefs.

Dahesh Voice also presents to the world the ideals and beliefs that. Dr. Dahesh promoted during his lifetime of creativity—a lifetime that was full of great, achieve­ments and a heritage that consists of about one hundred and fifty books of various literary genres published in Arabic, English, German, French, Russian, and Spanish; numerous academic studies written about Dr. Dahesh’s personality, spiritual mission and unique writings; a personal art collect ion of approximately two thousand paintings by great artists now housed in the Dahesh Museum in the heart of New York City, and one of the largest private libraries ever gathered in the Arab world.

In line with the teachings of Dr. Dahesh, Dahesh Voice focuses on promoting excellence and human perfection by shedding light on the lives and philosophies of great men and women throughout history. The magazine also covered a very wide range of subjects in science, medicine, literature, and art. Despite their diversity, one thread connected all these fascinating articles: the love of true knowledge.

At appreciation for the great endeavor that was made during the last three years, we would like to express our deepest thanks to all those who contributed to the success of Dahesh Voice, and especially our technical support team without whose continuous efforts no deadlines would have been met.

Finally, the Editorial Board is looking forward to a fourth year of publication with great enthusiasm and has many ideas for further improvements. We are committed and aspire to see Dahesh Voice become a leading magazine in the world of culture, know ledge and humanistic excellence-—the future of civilization. Only thus, we will live up to the expectations of our valued readers. ★