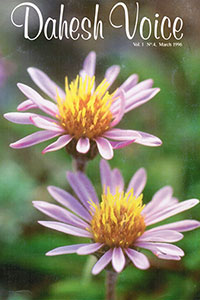 IS WESTERN CIVILIZATION IN CRISIS?

According to reports from the World Health Organization, suicide rates in the developed Western world have been on the increase since the early 1950s, especially among teenage and young adults. For example, in the United States, the teenage and young adult suicide rate is three times higher than in 1950. Additional statistics recently conducted in the United States provided the following data:

In one year some 30,000 suicides are committed by individuals of both sexes, and approximately 25,000 murders occur; the number of single mothers reached about 10 million; AIDS cases exceeded 250,000; not to mention the disturbing news concerning American youths (see Numbers Speak Out in this issue: Arabic section, p. 92).

In their controversial book The Bell Curve (review of the book in Arabic section, p. 77), Herrnstein & Murray stipulate that one of the important factors behind poverty, unemployment, child abuse, and the destruction of family unity is a decline in mental capacity in a large percentage of the population. It follows that this is a critical factor in the increasing drug and crime waves, as well as single-women birth

rates that reached almost 30% of all births among the Caucasians, and 70% among the African- Americans.

William Bennett, the former Secretary of Education and the author of The De-Valuing of America, and Steven Carter, a Yale law professor and author of The Culture of Disbelief, are among many researchers who suggest that “civilization crisis” underlies the moral, social, psychological and mental problems of the West, particularly in the United States. This crisis stems from the idea that Western civilization is built on technological advances and the relentless pursuit of wealth. This ideology has failed to provide the individual a meaning to life, a sense of belonging and spiritual values in which to believe.

Researchers have noticed that the American society is threatened by division, disintegration and dissolution as a result of extreme materialism arid individualism. The trend of individualism and materialism makes every ethnic or religious group seek its own financial needs first, and cause them to ignore or pretend not to know both the moral laws, and the distinction between right and wrong. The primary concern is the rapid fulfillment of the physical and sexual needs without contemplating the consequences « of such hedonism. Some Far Eastern political leaders have considered the declining social situation in the United States as evidence of the weakness of American civilization and its inability to lead the world (see World News, Arabic section p. 96).

Any culture that is based on individualism and is deprived of the spiritual energy will leave the generations to come to a feeling of emptiness, confusion, and desperation. Human being - cannot have a fulfilling life without hope and consolation in the immortality of the soul, the absolute, and the infinite. We hope that a spiritual awakening will expand progressively to include within its widening scope increasing numbers of westerners in order to empower them to renew, save and galvanize their civilization with spiritual values. Otherwise, the magnificent edifice of this civilization would begin to crack and disintegrate. One of history’s most dreadful examples is ever present in the fate that had befallen Rome. *