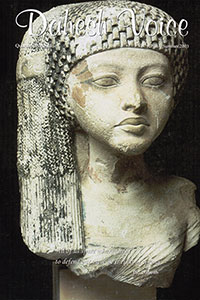 Although the UN was established to promote peace throughout the world, conflicts among countries have increased. Dr. Dahesh predicted in Memoirs of A Dinar (early 1946) that efforts towards

peace would fail as long as humanitarian principles and lofty values—on which the UN was founded—would not be carried out, and the super powers would advance their own national interests rather than universal interests even though their choices may generate global catastrophes. However, with goodwill, people can constitute one human family in which happiness and peace would prevail. Lofty goals would be achieved when mistrust and anxiety are cleared from small countries alarmed by globalization’s unfair assault; and when the super powers demonstrate their willingness to deal with international issues with genuine justice and equality; to act as global models, so that the weak of the world love them and embrace their ideals; to strengthen the role of the International Tribunal dealing with violations of international law, and with rulers’ oppression when groups or individuals cannot obtain justice (Dr. Brax, Ar. Sec., p. 5).

In his article on “Altering the Delicate Balance of Nature”, Dr. Salem presents an example of super powers’ indifference which may lead to global catastrophes. The rapidly increasing world population, accompanied by growing pollution of water, air and soil along with the destruction of the protective ozone layer and the extinction of life forms      may bring about gigantic disasters:

epidemics, global famine, and regression of civilization to the Stone Age (p, 4).

In order to outline the importance of preserving cultural heritage as a promoter of national identity and understanding among peoples. Dr. Nashif argues that cultural diversity is a priceless treasure granted to humankind, for if a national heritage has everlasting features, it becomes part of the common heritage of humanity. To preserve such universal treasures, the UNESCO has taken action on 690 sites in 122 countries and placed them under UN protection (p. 10).

Considering the retrogressive state of Arab civilization relative to modern progress, Mr. Al-Araji argues that ordinary people are not aware of the great impact exerted on their thoughts and behavior by the “Societal Mind”—a hypothetical combination of values, principles, traditions, ideological aspirations, etc.—which is usually safeguarded by authoritarian powers. The writer deems that the breakup of such influence, which freezes the present, is necessary for civilization renewal, and that the current conditions of both Arabs and Muslims are the result of conflicts between modernity and an erroneous understanding of cultural heritage, which has immobilized values and beliefs that relate to the Decadent Era much more than to Religious Law (Ar. Sec., p. 17).

Dr. Kik expounds on the role and influence of the Arabic language in Iran. He argues that Persian poets were greatly influenced by the style of Arabic poetry, and reveals that among the causes of that impact were the encouragement of poets by princes and governors, the aptitude of most Persian poets to write in Arabic and Persian, and the establishment of superior schools which taught religion and jurisprudence. However, the expansion of the Arabic language started receding when the Selljuks took power in the eleventh century (Ar. Sec., p. 31).

In addition, Dr. Aad discusses Arabic poetry during the Mameluk and Ottoman eras (Ar. Sec., p. 56); Mr. El-Baz discloses some interesting secrets behind the creative thought which helped to build the Sphinx and the Pyramids (p. 13); Mr. Wertsman selects 16 art museums in New York City to shed light on some of their priceless treasures (p. 19); Dr. Shemali explains what cloning is really about (Ar. Sec., p. 74), and Dr. Saad el Din contributes an interesting article on Music and Singing in Islam (Ar. Sec., p. 69). Furthermore, the Arabic Section includes an article by May Alloush and another on the passing of Dr. Farid Abou Suleiman, a prominent Daheshist (Ar. Sec., pp. 79 & 72).

This issue coincides with the 94th birthday of Dr. Dahesh. Thanks to him this magazine has been a platform for peace justice and fraternity among individuals and nations. On this occasion we present our readers with a short story by Dr. Dahesh in which love and breaking of priestly vows manifest in an impressive and inspiring way (p. 50). We also present two poems by Yasser Badreddine and Ali Jumaa (Ar. Sec., pp. 46 & 49) as well as a review of Dr. Dahesh’s two books The Lyre of Orpheus and My Songs by Ghalia Khoja (Ar. Sec., p. 83). ★