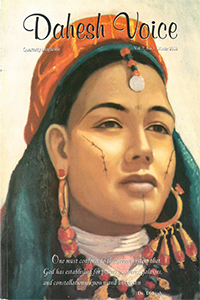 Globalization and its Consequences

The debate about the benefits of globalization remains. However, whether it is met with praise or apprehension, all state leaders and political scientists agree and war against future world crises and dangers which would affect all countries, regardless of their geographic situation or economic condition. What statesmen and illuminated thinkers came to comprehend recently, Dr Dahesh had warned against in the forties he was tenaciously against war. terrorism, illiteracy and slavery, always dreaming of "One World where peace, brotherhood, justice, and freedom would reign (See Dr Brax's article in Ar. Sec. p. 51)

Mr. Al-Araji ascertains that globalization seems to be inevitable, but unfortunately, for several reasons, the Arab World is still un mindful of it and is unprepared to share its expected benefits (Ar. Sec. p. 19) M Chaba Khoja reviews Lazqani's book. The Mills of Talk, and displays the author's humor and sarcasm in unveiling the state of decadence in which various aspects of Arab life are lost (Ar. Sec. p. 75). An important factor. probably, is illiteracy, which is a major universal problem that detains the progress of civilizations Dr. Haouili demonstrates that illiteracy is still relatively widespread throughout the world, and displays its causes and bad consequences, particularly on Arab countries (Ar. Sec. p. 65)

The English Section includes an article by Dr. G. El-Hage on "A Communicative Approach to Teaching Arabic in Academia" where he highlights the significance of the modern methodologies and approaches in teaching Arabic. as a second language, as well as the role of the instructor, the learner, the classroom and the textbook (pl. 4). It also includes the second part of Dr. Popp's article on the famous Arab-American review. Al-Funun, in which the Orientalist illustrates some unknown aspects of the journal, underlining the role of Nasib Arida in the Arab-American literary movement (p. 12) In addition, Mr. Vladimir Wertsman writes about the exhibition at the Museum of the City of New York (p 31) that focused on the history of the Arab-American community in New York City, its development, family and community life, and contributions in various fields of arts and sciences

The recent discovery of the first archaeological proof of the existence of Jesus of Nazareth is discussed in this issue (p. 20. Ar. Sec. p. 31). The new discovery confirms what Dr. Dahesh had announced 60 years ago, in his book Memoirs of Jesus of Nazareth that Jesus had a brother called Jacob. An ossuary that bears the Aramaic inscription which reads Jacob, son of Joseph, brother of Jesus" was discovered in Jerusalem.

This issue also includes a chant by Dr. Dahesh to the Savior (Ar. Sec. p. 63) a testimony about Dr. Dahesh offered by the well-known writer and painter, Mrs. Marie Hadad (Ar. Sec. p. 48) an essay on civilization by Mr. Shikhani (Ar. Sec., p. 35), and an article by Mi. Alloush on the history of Beirut from the last decades of the Ottoman era until the Lebanese Civil War in 1975 (Ar. Sec., p. 38), along with three distinguished poems by Mr. Ahmed Lutfi. Dr. Sema’an Salem, and Dr. Mounir Ashquti (Ar. Sec. pp. 84-86) *