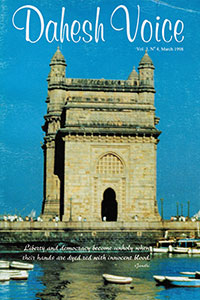 On January 30, 1948, Gandhi departed from this world to the world of the Spirit, after a long and harsh fasting he had imposed on himself in protest to the outrage of his people. The ferocious and uncontrollable outrage that was fueled by the raging fire of religious and national fanaticism and inflamed by hatred, was reshaped into deadly bullets that later took the life of the Mahatma. However, the spiritual flame that kindled within Gandhi was not put out by his death; rather, it intensified and its light spread over the entire world. Today, joined by the millions throughout the world, we commemorate the fiftieth anniversary of Gandhi’s demise.

On January' 1, 1973, Marie Hadad, the painting-artist, writer and heroine, departed from this world to a much loftier one. Like a burning candle she. had melted down by the myriad of sad and unfortunate events in her life. The arrogance of her relatives combined with hatred harbored by religious fanaticism acted as death-tools killing her slowly. Today, joined by Daheshists throughout the world, we commemorate the twenty-fifth anniversary of her departure.

Both, Mahatma Gandhi and Marie Hadad were guided by unconditional love; both renounced the worldly affairs

and mundane life, survived on the minimum of sustenance; and both chose cremation- a speedy transformation to dust-over having a burial ground for their bodies.

As a leader, Gandhi could have lived in luxury and total comfort with the lords at his service. Instead, he willingly abstained from the glories of this world with a burning desire to depart to the world of the Spirit.

As a member of a socially and politically powerful family, Marie Hadad could have Jived her life in luxury and material abundance. Instead, she willingly refrained from the brilliance of materialism and chose a simple life that would elevate her spiritually.

Gandhi was imprisoned for standing up for Truth and suffered extensively in his strife. He firmly faced colonization and tyranny until victory was achieved. Marie Hadad was detained and imprisoned because of her beliefs. She was tortured by both, flogging and the pain of knowing that her closest relatives were responsible for it. Yet despite her suffering, she stood up for her beliefs defying Beshara el-Khoury, the then Lebanese President and husband of her sister, until he was deposed.

Both, Gandhi and Marie Hadad had Truth as their guide and Virtue as their leader. Both believed in equality of humankind and unity of religions; and that all people can be brought together, regardless of their differences, through faith in the essence of religions based on Divine justice, reincarnation and just deserts.

Gandhi grew spiritually over half a century of strife to approach the level of a prophet. History will always recognize him as a bright spiritual torch with a raging flame that could not be put out as long as the Sun burns. Marie Hadad’s name is associated with that of Dr. Dahesh: as his name is glorified, so will her name be and as long as there is life on this Earth.

Gandhi and Marie Hadad symbolize virtue and strife for truth, freedom, and justice. Both harbored honesty, proved their words by action, and equated the contents of their innermost with the outermost. Every person can be a Gandhi or a Marie Hadad and every one can accomplish what they accomplished to attain fulfillment, but only through austere discipline, control of materialistic tendencies, conquest of the animal within and strife to spiritual elevation. The road to human perfection is difficult and painful but not impossible. *