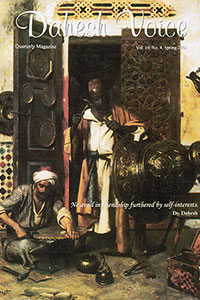 How Long Will Violence Rule the World?

March 12, 2005 marks the 75ih anniversary' of the famous Salt March with which Mahatma Gandhi started peaceful civil disobedience in India. This movement established a new method for political resistance, and led to victory over Great Britain, through wisdom, fortitude, and non-violence of the leader and his followers. Certainly, this anniversary reminds us of Gandhi, the man of peace, gentleness and humility, and of his assassination by one of his people, whom he greatly loved. It also stirs in us memories of the persecution of every prophet, apostle or spiritual guide, and of the recent assassination of a Lebanese self-made leader who was distinguished by unconditional generosity and great love for his people’s progress. For how long will violence remain the master of this world? Until when will Cain’s Spiritual Fluid shed blood? And when will man realize that who he kills is only his brother, and that whatever he sows, he will reap? (Ar. Sec. p. 5 & p. 8).

Searching for the causes of lagging civilization in the Arab World, Ala al-Araji agrees with the theory of al- Jabiri that attributes the lack of advancement of Arabs to three components of their socio-political mind: the tribe, the spoils, and the beliefs (political, social or religious), which dictate the behavior of governors and the governed. However, al-Araji considers that al-Jabiri failed to explore the causes that kept the Arab societal mind trapped in the bedouin mentality', notably, that Arabs did not pass through the agricultural phase (Ar. Sec., p. 16).

Reading through the reports of the United Nations on “Human and Arab Development” until 2003, Dr. Haouili concludes that Arab society is still under-developed and that the most significant obstacles which prevent it from

progress include government repression of freedoms (under the pretext of terrorism control) and control of the media, lower production and sale of Arabic books with government control of their contents, low emphasis on teaching in Arabic and the lack of “Arabization” of academic textbooks, the shrinking of the middle class, the interference of politics in knowledge, and the exclusion of Arabic in informatics. The writer wraps up by presenting a promising strategy and personal view points (Ar. Sec., p. 30).

Dr. Kik expounds on the life of Youssef al-SinTani, shedding light on his encyclopedic cultural capacities and the positions he held in the Vatican, along with the significant works he wrote, especially the book of Theology. After displaying the polemics in that book, the writer points to philosophical Arabic writings after Ibn-Rushd, particularly, Iranian Sufism and Christian theology (Ar. Sec., p. 37).

In the English section, Dr. Del Vecchio presents Vasco Pratolini’s Search of Eden, “a soul- searching voyage, a self-discovery and an internal quest for the perpetual and eternal characteristics dormant in every one of us”. She writes that the Italian neorealist novelist, who lived during the fascist era, Pratolini, incorporated a theological interpretation of history in his works (p. 17).

In his new book Government, The Intellectual and Society in the Third World, Dr. Nashif emphasizes the “differences between the personality of the politician and that of the intellectual in terms of their tendency to exercise influence and to benefit from the possible and the actual”, and concludes that the politician “is a greater threat.. .to democracy, pluralism and public interest (p. 13).

Dr. Serna’an Salem focuses on the precedence of the Fertile Crescent in the domestication of plants and animals. He points out the important role of the region’s fluctuating climate in that process, a role over which man had no control (p. 4).

This issue also includes several interesting Arabic articles on al-Shubashi and Sibaweh, by Helmi Salem (p. 60), a perspective of the Islamic stance towards poetry and poets, by Gamal Omar (p. 66), heredity and genes, by Dr. Yahya Shemali (p. 75), Naguib Mahfouz and the cinema, by William Ghazarian (p. 78), along with a short story by Dr. Dahesh, in which he reveals unknown moments from the romantic life of Napoleon (Eng. Sec. p. 33), and two beautiful poems by Youssef Abdel- Samad and Ali Jurna’a (pp. 53 & 56). ★