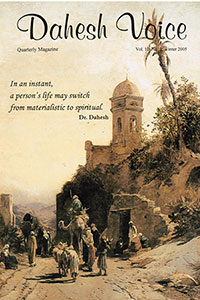 To explain various aspects of the human condition or world events, social scientists draw on political, cultural, economic and social factors. Although valid, these factors are not the cause, but rather the result of spiritual causes that stem from present and past human intellectual and moral choices.

Not knowing the spiritual basis of what happens in life, people tend to doubt Divine Justice or believe in the absurdity of existence, especially when wars and revolutions, earthquakes, floods, and other natural calamities ravage the innocent. To clarify such tragic events, Daheshism explains that life is like a live river flowing from .eternity to eternity, a river where antecedent flows influence subsequent currents, allowing tight and continuous flow’, where neither one is aware of the other. Yet, the course of the river of life is controlled by divine justice, according to a strict causality' that allows no single mistake or injustice. Because human beings are incapable of uncovering the spiritual causes, prophets and spiritual guides are necessary (See Dr. Dahesh, Ar. Sec., p. 5 and 69 and Eng. Sec, p. 22; and Dr. Brax, Ar. Sec, p. 6).

Following in the footsteps of sociologists, Ala AI-Araji tries to uncover the social and economic factors that could influence the present condition of the Arab World. He compares and contrasts the prosperity of Arabs just after the advent of Islam with those after the oil boom, highlighting similarities, such as rapid wealth, agrarian economy, and disdain of work (Ar. Sec, p. 39).

She reveals that Khaled refuted the contradiction between religion and modernity once they are properly understood, arid that he rejected faith based on the blind following of tradition as opposed to rational illumination. She also states that Sheikh Khaled promoted the improvement of societal law, disapproved of war not in self-defense, and called for the unity of religions, which all awaken human conscience (Ar. Sec, p. 25).

With a spiritual and modem outlook. Dr. Victor Kik presents the possibility' of Christian-Moslem dialogue. He offers that human brotherhood and the universal goal of peace dictate such a dialogue, especially that the Gospels transcend the concept of dialogue to one of love of enemies and even blessing those who would do us wrong, while the Qur’an calls to “argue with them [the believers in all religions] in the best manner”, and affirms that there is “no coercion in [adopting] a religion”. Although difficult to attain, dialogue can bring great benefits (Ar. Sec., p. 17).

Mr. Samir Chikhani revisits the life of Buddha, the great ascetic who renounced luxurious life in the royal palace to live in seclusion and austerity to teach people how to be saved from the cycles of reincarnation on this miserable earth. He established a religion which is adopted by millions of people who call for human brotherhood and a peaceful world (Ar. See, p. 51).

This issue also includes an article by Dr. A. Etman on a new translation of Homer’s Iliad, in which the translator drew upon the original Greek text. Dr. Etman does not only state the merits of the new translation, but also gives credit to Suleiman Al-Bustany who was the first to translate the Iliad into Arabic poetty (Ar. Sec. p. 56).

The Arabic section also includes an article by Fatima Naoot on the “ghost of death that haunted the last days of Virginia Woolf” (p. 61), another article on the theatre star Youssef Wahbi, by William Ghazarian (p. 79), and a book review by Ghalia Khoja of Suleiman Al-Issa’s, “Thumalat” (p. 85), along with an excellent poem by Dr. Joseph Sayegh (p. 68).

The English section includes an article by Dr. Sema'an Salem on how birds, fish and marine mammals use earth’s magnetic field in navigation (p. 9), another by Elizabeth Boosahda on the “Origin and Integration of Arab-American Immigrants” (p. 4), and a third on “The Historic Development of Languages in Algeria” (p. 14), by Hind Amel Mostari. Finally, a short story by Dr. Dahesh reveals the spiritual causes of human misfortune (p. 22). ★