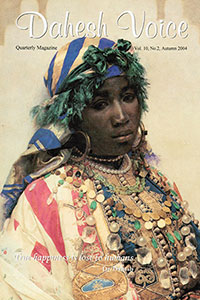 Daheshism explains the unconscious in individuals or groups, in a manner that transcends the hypotheses proposed by psychologists. The possibility of falling to worldly low temptations is universal, as is exposure to illness, suffering and death. Man has no power to resist these inherent psychological and physical conditions, because they are controlled and activated by the vital and fundamental Sayyal (Spiritual Fluid) that has been transmitted from Adam, after his fall, to his entire progeny. They constitute the general unconscious, which became the fate of mankind.

However, the unconscious also comprises other dimensions with which humans can deal positively or negatively. Human beings have spiritual extensions represented in Sayyals of different levels. Some have Sayyals on Earth, others on worlds of lower levels, but many have Spiritual Fluids in sublime-level worlds. When one succumbs to the low drives of his unconscious, abject temptation, he/she lets himself / herself be under the control of low or evil tendencies, which would lead him/her to fall into perversion and crime. On the other hand, a large number of people are moved by unconscious, sublime drives, influenced by their Spiritual Fluids in different paradisiacal worlds. They inspire them with lofty works of art, literature, science, and philosophy (Ar. Sec., p. 6).

Dr. Dahesh’s short story' (p. 24) illustrates how an unconscious, evil drive can overcome a person. Deep friendship turns into fatal enmity because of jealousy over a woman.

Ala’ Al-Araji expounds on the negative impact of the Arab “societal mind” on civilization in the Arab World. He

writes that pre-Islamic tribalism still prevails on the mentality, morals and customs of many Arab societies. He attributes the cause of that tribal condition to the fact that most Arabs have not passed through the agricultural phase, which is essential for stability', cooperation and the rule of law. The writer seems to emphasize the strong and dark drives still active in the collective unconscious of most Arabs since many centuries (Ar. Sec., p. 29).

However, in such a traditional society', unique, creative and broad-minded people may emerge from time to time; like comets they force their way into the darkness. Among them is Sheikh Khaled M. Khaled in his first intellectual phase that started with his revolutionary book, we Hence Start, in which he discusses social injustice. Sheikh Khaled insists that, to achieve social justice, religion must be purified from superstition and deviation, separated from state politics and freed from exploitation by clerics. He also urges the elimination of feudalism and greed of the wealthy—-to free the economy and reduce the wide gap between social classes (Ar. Sec., p. 18).

Dr. Victor Kik presents the 14* century: Persian Sufi poet “Hafiz”, who affirmed his presence in world literature with his poetry translated into many languages, and influenced Goethe, the great German poet. Hafiz is a good example of how man can renounce unconscious, materialistic, low motives to receive inspiration (Ar. Sec., p. 40).

This issue also includes significant articles. In the English section. Dr. Nashif writes on human rights, inherent to human nature, and hence, it is imperative to protect them by appropriate means (p. 4). Dr. Etman clarifies the identity of Cleopatra, distinguishing between historical facts and legends that identified her with Isis (p. 9). Dr. Jamil Daher writes about the use of Standard vs. Colloquial Arabic in writing personal letters (p. 13).