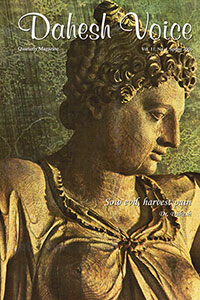 Advances of Civilizations Correlate with the Progress of Intellect and Behavior

Historians tell us that quarrelling Greek cities, in fifth century B.C., teamed up and created a small fighting force that defeated the huge Persian army in the battles of Marathon and Salamis; however, they do not reveal the real causes of that unexpected victory, without which all of Greece would have been a Persian colony. Drawing from the concept of spiritual causality and the law of punishment and reward, as perceived by Daheshism, it appears that the Greek victory was necessitated by an immutable divine system, to clear the way for the emergence of spiritual guidance that would establish a civilization which would become one of the most important foundations for the rise of Western power for two thousand years. Thus appeared Pericles, the greatest and most righteous ruler Greece has ever known, as well as Socrates, Plato, and several great thinkers and artists. Despite Athenian resistance to moral reform, divine mercy gave them another chance, but they failed, as they even sentenced Socrates to death. Accordingly, Socrates’ prophecy was fulfilled— Greece was subjugated by its enemies, and its civilization has continuously withered since then (Ar. Sec., p. 8).

In the field of social reform, Dr. Majid Fakhry reveals the fundamentals of the rapprochement between Islam and Christianity since the advent of Islam until the current time (Ar. Sec., p. 30). Dr. Samira Madi reflects on the views of Sheikh Khalid M. Khalid that Islam asserts equality of men and women, but Koranic verses and prophetic tradition have been misinterpreted. Hence, it is imperative to establish equality of men and women in duties and rights and to ignore social traditions that are not sacred and just (Ar. Sec., p. 20). Ala al-Araji discusses the less than satisfactory reasoning in the Arab world although the Koran and the Prophet promote learning and knowledge. In that respect, die interest of Abbasid Arabs in other cultures as well as in “recording” opened an “era of excellence” and created, the foundation for a flourishing Islamic Arab civilization (Ar. Sec., p. 41).

In the field, of literature, Dr. Maha Attar discusses the evolution of prose from the Arabic Renaissance (19th century) until modern times. She points to the resurgence of fluent prose by Gabarti, Tahtawi, Ahmed Fares el-Chidiac (whose writing was full of creativity and linguistic novelty) as well as the Bustanis. She also expounds on the innovations in prose manifested in essays, novels, autobiographies, and critiques (Ar. Sec., p. 58). Fatima Naoot deals with the issue of translating poetry, which requires adaptation, flexibility and intelligence, as it is an act of creativity, not literal transformation, otherwise the translated text would be emptied of its poetic power. Poetry translators should realize that they read original texts spanning geographic and temporal barriers, then tiy to match them (Ar. Sec., p. 67). Kamal Riyahi explores the reasons for the Algerian novelist, Rachid Boudjedra’s return to writing in Arabic, after writing in French for a long time; he relates them to “psychological stress...and to the relationship [of the author] with the Arab people and atmosphere.” Riyahi also presents some of the characteristics in Boudjedra’s Arabic novels (p. 80).

In the English Section, Dr. Sema‘an Salem traces the history of using the number zero, from its emergence in Mesopotamia to its moving to India, and then its return to Iraq during the golden Arab era, and, finally, its transfer to Europe, which had been apprehensive of the “emptiness" of zero for two thousand years (p. 4). Dr. George el-Hage compares and contrasts Abu Tammam and al-Buhturi, revealing that Abu Tammam was influenced by a mixed, new culture, and attracted to rhetoric, whereas al-Buhturi remained attached to the classical literary' stream (p. 10). Hind Mostari continues her psycho-literary exploration of Hemingway’s world, focusing on an analysis of the characters in The Sun Also Rises (p. 17).

This issue includes a short story by Dr. Dahesh, which reveals, in a fascinating style, the great influence of bodily desire on man ’s behavior, even if he were an angel incarnate (p. 24). The issue also contains an unpublished letter about the Lebanese civil war which Dr. Antoun Ghattas Karam sent to a friend (Ar. Sec., p. 92), in addition to two poems by Dr. Jameel Daher and Salah Kanakri (Ar. Sec., p. 56). ★