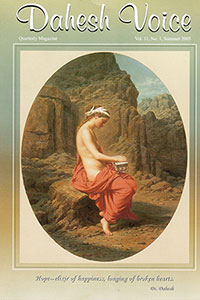 on its Tenth Anniversary

With this issue Dahesh Voice celebrates its tenth anniversary which coincides with the 96th birthday of Dr. Dahesh whose name this magazine bears. During the past years the circle of Dahesh Voice readers and contributors has widened to cover the

United States, Canada, and most of the Arab world. On its tenth anniversary, the Magazine promises to continue its humane and spiritual line, which glorifies truth, goodness, virtue, freedom, beauty, art and scientific progress as much as it exposes falsehood, evil, oppression, and ignorance.

In this line, this issue includes discussions on the concept of fate. Daheshists believe that peoples as well as individuals determine their fates by their deeds, tendencies and thoughts, according to an immutable and just spiritual law. Examples from events that have occurred in the Middle East since the Deluge to the Advent of Christ and their spiritual causes are clarified (Ar. Sec., p. 6).

Ala Al-Araji discusses the Muslim’s attitude towards fate. He explains its religious concept and points out Qur’anic verses assumed to be the basis of this belief. Furthermore, he illustrates the conflict between the religious movement that adheres to the belief in fate which compels man’s actions and the other that negates it stressing on man’s responsibility for his deeds. He also illustrates how the Arab sovereigns exploited the idea of fatalism to subjugate Muslims and establish their rule (Ar. Sec., p. 23).

of colonialism, capitalist and communist regimes, and the contradiction in the concept of the “just dictator”. She also shows that Khalid considers that world peace will be attained only by relinquishing economic and expansionist ambitions and by replacing the sense of nationalism with that of humanism.

Furthermore, she demonstrates Khalid’s stress on the importance of free speech and the presence of opposition and enlightened public opinion in building a democratic society (Ar. Sec., p. 40).

Dr. Bushrui approaches the issue of unity of religions in Ameen Al-Rihani’s thought. This Lebanese author distinguishes the one Great. 'Truth in all major religions from the diverse rites and rituals. He also points out that sectarian fanaticism hinders Arab societies from progress. Furthermore, ALRihani emphasizes that a democratic and progressive state can. not be established on sectarian basis; however, this does not imply relinquishing religion rather rendering religion a live bond between man and God (Ar. Sec., p. 57).

In the English section, Dr. Abadir writes about the environmental factors which shaped the personality of Naguib Mahfouz and influenced his literary style and orientation, in addition to the topics he covered, whether historical, pharaonic, or modem, social and intellectual (p. 4).

Dr. Ennaji discusses the interaction between human rights and culture based on religious traditions, focusing on Moroccan society. He demonstrates that tire concept of human rights is modem: it stems from the French and American Revolutions, and is corroborated by the United Nations, and influenced by culture and social values in every nation; while the concept of “human dignity” is ancient (p. 14).

In addition, this issue includes a short story by Dr. Dahesh, which manifests God’s justice and wisdom in his creation, along with two reviews by Dr. Salem and Dr. Takrouri, and 3 poems by Ambassador Abdulrahman Gdaia, Amira Zahid, and Yasser Badreddine. ★