Introduction to " Memories of a Dinar " 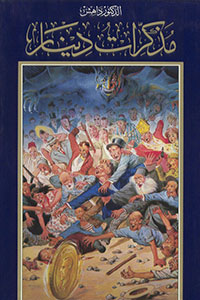 Memoirs of a Dinar

It is the truth, unadulterated with no lies tainting its purity, thus reducing it into an absolute joke.
For I am but an honest witness reporting faithfully what I have seen, and expressing my utter surprise at this inspired literary wonder taking place. As God is my witness, this is a miracle out of many of God's works.

When Dr. Dahesh decided to write his novel, Memoirs of a Dinar, he wasted no time in the serious execution of his idea.

I saw him withdraw himself into a solitary retreat, sit at his desk and begin to write with amazing speed-as swift as a bird flitting among trees and from one bough into another.

He initially spent a total of nine hours devotedly recording down his thoughts, then gave me, as usual, the stack of papers, rather his soul's whisperings, to transcribe into a clean copy, which I then would render into Arabic verse.

A full week had passed at the end of which the great novel Memoirs of a Dinar was completed. The book skillfully described the social ills of humanity in both East and West. Dr. Dahesh dissected them on the operation table of his powerful critique. No ills could escape his incisive scalpel.

Dr. Dahesh encompassed in his novel a whole spectrum of life's most important or delicate issues, delving into them with the knowledge and critical analysis of a master expert. Yet, he did not spend from beginning to end more than seven days exactly!

Some readers may laugh at this and find it hard to believe, but nonetheless it is still a fact, actual and undeniable.

No doubt, many will accuse me of recklessness and exaggeration. I don't blame or reproach them if they do, for had any one told me what I am now telling the public, I would myself have accused him of first rate bias and of having an axe to grind. I assure the reader that Memoirs of a Dinar is not the first nor will be the last of a series of books that Dr. Dahesh has written and will continue to write.

So far he has written more than fifty valuable books about different topics, dealing with many issues of everyday life and its complicated and interrelated human subjects. He has penned all these books with an incredible speed hard to believe except by those who saw him and talked about it.

No matter how big a book he starts to write, he can finish it in ten days at the most.

If we were to suppose that a great writer in his fifties or more decided to write a magnum opus like the Memoirs, despite his vast knowledge of the world, its good and bad, bitter or sweet, he would need several years to finish it.

Wouldn't Dr. Dahesh who is still in his mid-thirties require a much longer time to finish such a work?

I should thank God that Dr. Dahesh has many friends, supporters, and followers who like me have seen the manner and speed of writing this book, and who would support and confirm my words; and as I give witness now,
they will bear witness in turn.

When eastern writers and scholars want to criticize certain ills of society, they tend to gloss over them with ornate phrases and eloquent play on words. They cast these ills in rhetorical molds, shaping them, polishing them, and skillfully presenting them in a flourish of grand literary style.

The motivation behind this verbal elegance is to obscure the tragedies of the harsh life and lessen their unpleasant impact on humanity. They do this by adorning these social tragedies with their elegantly controlled verbal manipulation.

Despite the good intentions and noble efforts of these eminent writers to steer society in the right direction by drawing attention to, and cautioning against any further emotional indulgence in the sea of vice, they actually inadvertently harm society by not presenting its evils as they really are and by failing to address the issues directly.

But truth comes naked, not clothed in camouflage.

These experts in verbal embellishment do not expose the defects of society on the operating table of their criticism; do not take these ills apart atom by atom with the scalpel of their dissecting pens and shattering critiques. They have lost their sense of purpose and have failed to bring their cause to the attention of society that is being ravaged by the pestilence of these dangerous ills.

Indeed, gentlemen, this is the truth, clear and untarnished.
Though most writers shrink from revealing life's truths or avoid delving into its dark depths out of compassion for the little that man still recognizes as morality or common decency, I beg to differ and operate outside the limits of these conventions.

Truth is still the daughter of inquiry, regardless of the scorn of the sticklers and the ranting of those who feign virtue. My good intentions-my desire to redress our moral wrongs, if indeed such redress is still possible plead my case for me.

Although I am certain that this golden dream is far from attainment, I have nevertheless recorded my views with sincerity and laid them bare without disguise.

This, therefore, is the effort I offer to humanity. And these are its ugly
and venal images. If my book should meet with acceptance by readers, then I
will have accomplished my goal. If it does not, I will hardly be affected and
the truth of the hard reality will remain unchanged. I am content to have
satisfied God and my own conscience.

I aspire to no more.