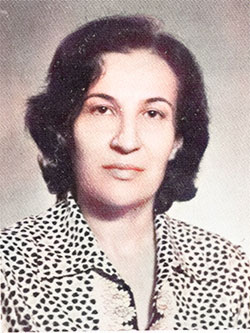 Mrs. Rabab Badreddine tells us some of the miracles she had seen…

She says: Dr. Dahesh was sifting through the mail he had received the morning of my visit. Among the piles of mail, I pulled a catalogue that I liked. This catalogue was full of pictures from a large Spanish company displaying its product line. I liked the photo of a beautiful envelope opener with a caption below it “Made in Spain.” Dr. Dahesh looked at me while smiling and asked me: “Do you like this envelope opener?” I said to him: yes. He then said: “Put your finger on the picture,” and I did, and all of a sudden, the picture materialized and transformed into a metallic piece resembling the envelope opener and on it the inscription “Made in Spain.” Dr. Dahesh smiled and said to me: “Take it as a gift.”

In another visit, I picked up an album to look through, however, I found that all the pages are blank! I said to Dr. Dahesh: It seems that you have not glued any photos on it yet. He said: “Yes, it is true.” After few seconds he said to me: “Look again,” so I did only to find the album full of butterflies of beautiful colors, however, they were preserved. Dr. Dahesh touched the album and all of a sudden the butterflies that filled the album began to move and transformed into living butterflies that flew from the album into the room!