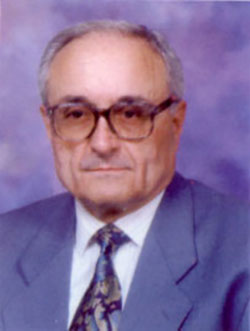 My family was away for the summer holiday, however, I remained at my home in Jounieh (a city on the Mediterranean, north of Beirut). It was around 9:30 PM when, a relative of mine knocked on the door wanting to discuss an important issue with me. His visit lasted for two hours and soon after I turned the lights off and went to bed. Soon after I entered my bed, I remembered that I did not water the flowers that we keep on the terrace. I jumped out of my bed and headed towards the kitchen, passing through the living room, in order to get some water. All of a sudden, I felt an electric current pulling me to the left and to the right—as if an electric waterfall is pouring all over me and filling the entire house. I felt power come out from me and another pushing me backwards. The radio suddenly went on and was loudly playing a song by the Lebanese singer Sabah—even though the radio has not been turned on for a week and was actually unplugged. The song lyrics are: “we came home looking for our loved ones and all we found was an empty house complaining about those who are away.”

I ran outside to ask the neighbors if they felt anything unusual happening and they said no. I returned to my house in a hurry and as soon as I stepped in, the electric power pushed me backwards. In the morning, I traveled to Beirut to visit Dr. Dahesh along with the relative who visited me the previous night and told him what has happened. Dr. Dahesh left me to go to an adjacent room and returned in few seconds with a publication titled Al-Mukhtar, issue 47, July 1947. He pointed to me with his finger to open to a particular page and read its content. As I did, it was the story of a ghost and is identical to what has happened to me. I read it twice and then Dr. Dahesh looked at me and said: Open this drawer and take the middle “Ramz” out and open it. He said this and pointed to his desk. I did what he has asked of me and upon opening the Ramz, it had the following statement: “When brother Moussa Al-Maalouf tells you about the radio and the song of Sabah, show him the Al-Mukhtar and have him see the content of this Ramz after he had a chance to read the story.”

Note: Dr. Dahesh, the Returning Christ, proved to Moussa that he was aware of what was happening to him and protected him.