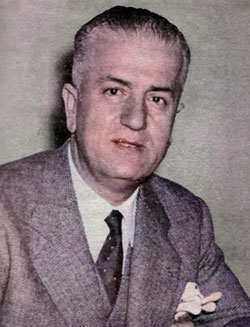 Testimonial of the Lawyer Edward Noon

This testimonial appeared in “Burooq Wa Ru’ood,” issue 1, year 1, 1968. I have paraphrased whenever possible.

There is a mission for every living being that must be delivered in accordance with his means and with what his conscience would allow. Comes the Day of Judgment, he must be ready to provide a full account of his deeds. I have come to know Dr. Dahesh in the summer of 1943, when he visited me in Beirut accompanied by the late Halim Dammous. I have also known Dr. Dahesh during the period of his persecution despite all the miracles he performed. I have known him as an attorney defending him during his arrest and through the investigation that ensued where he was an innocent victim of an illegal process.

In 1944, Dr. Dahesh performed miracles in my presence and sometimes in the presence of many acquaintances and friends. His miracles are indicative of his special talents that we all agreed to attribute their source to the Spirit. Heavens gifted him these powers since childhood and he managed to supplement them with a special discipline that lead to his being awarded an honorary Doctorate degree. In particular, I have witnessed the multiplicity of his heavenly Personalities, his sudden disappearance, and the teleportation of objects from one place to another. Once, a person appeared all of a sudden and everyone thought it was an illusion and of all those present, I was the only one allowed to touch and talk to him.

I witnessed these miracles without showing any emotions or bewilderment. I remained calm and trusting, even when it was normal for a person to show signs of uneasiness. How? Why? Questions addressed to me by Dr. Dahesh in reference to the miracles that I have witnessed and I would respond to him by saying: There are lessons to be learned from the principles that form the basis of all religions and not from the miracles. Because, having trust in God while witnessing a miracle gives the believer a relaxed psychological state that prevents him from losing balance and allows him to accept it as a normal phenomenon, for God is truly capable of everything. Intentions and trust in God are the best defense in all circumstances and will not require the believer to understand and explain miracles, because they are not the essence of his faith.

If we recognized materialism and deception to be the tools of Satan in order to control the world, then we are certain that true spirituality is the only mean for the salvation of humanity. True spirituality is carried by the Prophets of God, so that it can spread throughout the masses. Some Prophets were limited to preaching and accomplished acts that created righteous social programs and principles, while others attested their mission and preaching with miracles.

Materialism and paganism were rampant in humanity throughout the Roman Empire when Christianity came about. At that era, society was divided into many diverse factions where relationships were based on force and not the brotherhood of mankind and justice. Most people lived in a sick and selfish society that indulged itself in acts of lowly desires and understood little of the lofty principles of Christianity. The message of Islam came in agreement with Christianity in the need to believe in one God and the practice of good deeds. With the passing of ages, humanity struggled continuously to abide by these edicts and failed. Of course there are always exceptions, but for the most part, the behavior of humanity now is not much different from that at the days of the Roman Empire, where people become slaves to brute force under the cover of justice; materialism under the cover of science; and decadence under the cover of social justice. They have strayed far away from spirituality and the essence of religions, that call for faith, good deeds, peace, and the return to God at Judgment Day.

Certain individuals claim that religions have failed—especially Christianity that calls for “love one another as I loved you…” What was meant by this great famous sermon—which is known as “sermon at the mount”—that man, was created in the image of God and must respect the soul that gives him life. That this soul must return to God and the easiest way to accomplish this is by following His Commandments, in practice and not in pretence. Failure to do this will subject the soul to suffering that continues until the soul is purified. Only then, the soul is able to “earn” back its return to the Maker.

All religions lead to God if their application is proper and free of personal interests and gain. In this regard, the responsibility of the clergy, politicians, and intellectuals is great. Deviation from religion and promoting self-interests and actions due to degenerating religion and ethics, has led the world to the brink of destruction. So, what can be done after what has happened? Some people were led to atheism and some resorted to materialistic indulgence without regard to life after death. Some people revolted against themselves and the world by committing suicide. As to the group of believers that remained, they believe with their lips while their hearts are harder than stone. Very few are supporters in fact—those are the elect as referred to in Holy Books.

Dr. Dahesh approached them saying that this situation requires immediate treatment before it is too late, because the world is threatened by destruction and the signs of the end of time are clear. As long as the mission of love has neared failure and is threatened with bankruptcy, then the only remedy is to tie love with reprimand for the world. Only through the idea of spirituality with justice and reprimand—that enhances love and not fight it—that we are able to reach real world peace as desired by the hearts and called for by the mind.

Initially, Mr. Edward Noon was sent by the Lebanese authorities to spy on Dr. Dahesh. However, prior to his visit to Dr. Dahesh, his intentions were unveiled to the founder of Daheshism through a Spiritual Session. When he visited Dr. Dahesh, he was taught how to make the Daheshist Ramz and a Spiritual Session took place for him in the presence of many. Mrs. Isabelle Noon, his wife, had lost a golden ink pen while skiing in the Laqlouq mountains of Lebanon many years before she and her husband met Dr. Dahesh. At the time she lost the pen, Mrs. Renée El-Khoury, the sister-in-law of the former Lebanese President was skiing with her. During the Spiritual Session and based on the request of Mr. Noon, the pen was retrieved in a blink of an eye. This was sufficient for Mr. Noon to inform the Lebanese President that the performances of Dr. Dahesh are not figments of imagination of the Hadad family and others, but rather an irrefutable truth. The proof to that is the retrieval of the pen that his wife lost years ago while skiing with his sister-in-law.