Introduction to "Memoirs of Jesus of Nazareth V.1 " 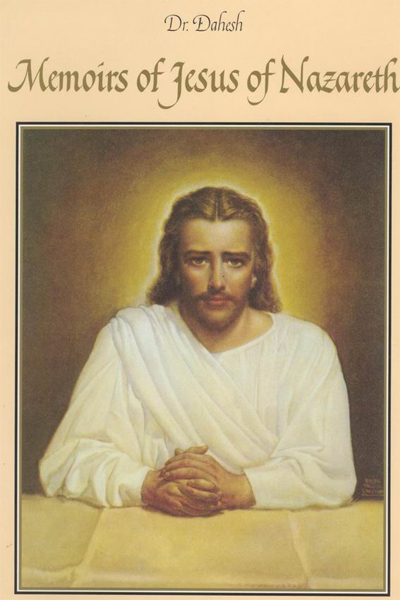 Memoirs Of Jesus Of Nazareth

Two thousand yearsago
they crucified you unjustly
for your teachings,
and to this day they declare themselves
the enemies of all reformers.
Enraged, they howl, curse, and stone.
No good can be expected from these straying,
beguiling and deceitful humans.
They are mired in sin
and cannot be saved from its foul swamps.
They trifled with your commandments,
ridiculed your counsels,
and mocked your laws.

THE MOSTWONDERFUL BOOK
I HAVE EVER READ

This extraordinarybook unveils the unknown life of Jesus Christ - his life as a childand an adolescent. The four Gospels relate accounts of his miraclesafter the age of thirty; however, we know nothing of the yearspreceeding that.

When I read this book, I was totally captivated by its eloquent style, its amazing secrets and astonishing events. I readit avidly and wished it were a thousand pages long.

But how did Dr. Dahesh come to know the unknown life of JesusChrist? This matter will be revealed to the readers and to the wholeworld at some point in the future. When it will be reported by allthe news media of the world, its impact will be far greater thanthat of any nuclear bomb. Whether or not the world now believes thatwhat is written in this book is true, the truth will remain trueeven if attacked by all of humanity. As for myself, I loudlyproclaim that Memoirs of Jesus of Nazareth undoubtedly containsauthentic memoirs: their secret has been revealed to me, and theirevidence is unassailable. And when in due time it is made availableto the whole world, people will be as convinced of its authenticity as I am. Mountainswill shake and crumble before I doubt this truth.

Until that day, which I hope will be soon, I am certain that whoeverreads this wonderful book will be delighted by its style andcaptivated by its events.

I eagerly await the appearance in print of the second volume of thisbook. I hope Dr. Dahesh will publish it shortly, to satisfy mydesire and that of the readers to discover another hidden chapter inthe life of the founder of Christianity.

This book, the first of two volumes of the Memoirs of Jesus of Nazareth,covers events of Jesus' life between the ages of twelve and fifteen,with flashbacks to his birth and early childhood. It accords withcertain accounts of the Gospels and expands upon them. Yet, basically,the facts and teachings it relates have been totally unknown.

The life of Jesus prior to the age of thirty is shroudedalmost entirely inobscurity. The Gospel stories constitute a brief account of a shortperiod widely considered to be his public life. They are virtuallylimited in scope to his outward acts and utterances, and do not form abiography in a true sense.

Furthermore, the Evangelists, by their own admission,have left a great deal of what they knew of Jesus' life unaccounted for.Such selectivity could not have been carried out arbitrarily, withoutgood reasons and justifications. In the Gospels, specific statements byChrist himself reveal that certain events and teachings were to be kept secret for acertain time. Perhaps he had also enjoined the disciples to keepcertain other events and teachings totally undisclosed. The world atlarge may have not been prepared, in terms of spiritual maturity andmerit, to accept certain facts and teachings of Christ to which thedisciples were privy. In the same vein is Christ's saying to them onthe eve of his supreme agony: "I have many more things to say toyou, but you cannot bear them now" (John 16:12).

There has always been ayearning to discover the historical Jesus, to learn more facts aboutthis much beloved and most influential personality in history. Thisdeeply seated desire has been increased by the rise of rationalismin modern times, by the discrepancies in certain details between theGospels - which in my judgment do not impair their basictruthfulness or inspirational genius - and by the widespreaddecadence in fundamental values that calls for a spiritual revivalbased on unshakable grounds. But all the attempts made and all theefforts exerted by different scholars to reconstruct the life ofJesus are, for whatever reasons, of necessity confined within the bounds ofspeculations, deductions, and probability.

This book is a responseto this universally felt need as well as a fulfillment of a divinepromise made by Christ himself two thousand years ago. It is not abiography of Christ but an autobiography, a "Memoir." It differsfrom the Gospels in that it recounts the events in a continuouschronological order, with descriptive precision as to details, places, and personages. In it thedivine voice of Christ himself is heard speaking directly to us with hisheavenly love and compassion; not only his outward acts and sayings arerecorded, as in the Gospels, but also his deepest thoughts, aspirations,and dreams. From the very first sentence in the Memoirs, Christlays bare the whole divine drama of his life, his self-consciousness,his total awareness of his Mission and his heavenly origins.

But is this book just a masterpiece of creative writing, reflectingmerely the imagination and thoughts of its author, as aestheticallymediated through the personality of Christ, or is it an authenticbiography, or, rather, an autobiography of Christ?

Either way this book remains extraordinary, a work of inspiration andgreat genius. For it is deeply moving, radiant and pure as the spirit ofChrist himself that shines forth through its words. Reading this book islike living with its divine figure, partaking of his sanctity andwisdom, and freeing ourselves from the burdens and confusions of ourearthly life. No one can read this book without being touched by itslofty ideals of love and compassion. What is most significant is that wecome out of it with more love and devotion to its central personalityand to his celestial plan for the good of humanity and its salvation. Ifthis is a work of fiction, then the author has marvelously succeeded inreincarnating himself, intellectually, in the personality of Christ, andin resurrecting him on his pages with such convincing vividness of life, sanctity and purity of soul. Therefore, ifthis work mirrors the inner self of its author, then the author mustindeed have the divine spirit of Christ in him.

Accepting the claim that the Memoirs of Jesus of Nazareth isauthentic is tantamount to accepting the claim of his resurrection fromthe dead two thousand years ago and an assertion of a rebirth of Christin our twentieth century.

It would certainly be pretentious and absurd to attempt, in anintroduction, to convince the reader of an issue of such magnitude andseriousness, which would require a book by itself. Reaching thisconclusion is bound to our understanding of the life and personality ofthe writer himself, Dr. Dahesh. For those who still hold Truth as asupreme value, further search for the historical Jesus may begin throughthe study of a contemporary genius, Dr. Dahesh.